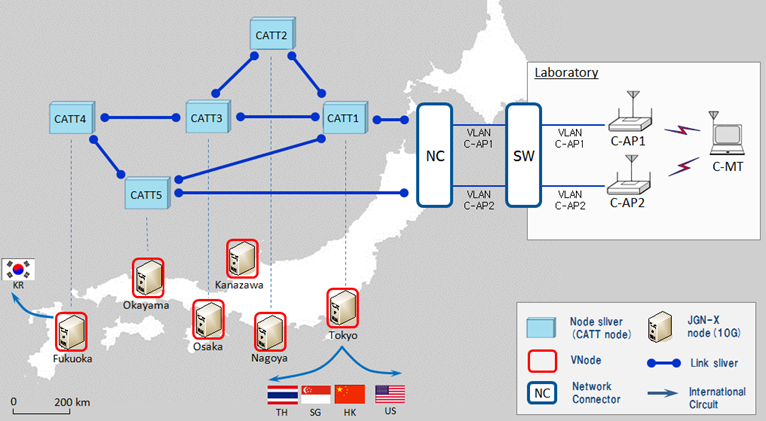 ICN has attracted much attention of network research community due to its paradigm shift in the network from end host to information. In this paradigm, a perpetual connectivity is no longer required between end-to-end hosts, which enables ICN to support mobility as the norm. More specifically, ICN communicates using the name of data object, which eliminates the need for end terminals to resolve the location of the data based on its name. This simplifies mobility management for the end hosts, especially when the data or the host holding the data is relocated during the communication. Moreover, the name based communication, which is the essence of ICN, enables individual ICN nodes to be aware of user requests as well as the corresponding responses so that any ICN elements can host data objects and deliver them to users on requests, which functions as an independent content provider. In the light of the observations, we extend an ICN architecture named CATT (Cache Aware Target idenTification), to mobile environment to design IEEE 802.11 wireless access points (APs) with CATT so that network operators can use it as a nano data center which can be complementing existing data centers. 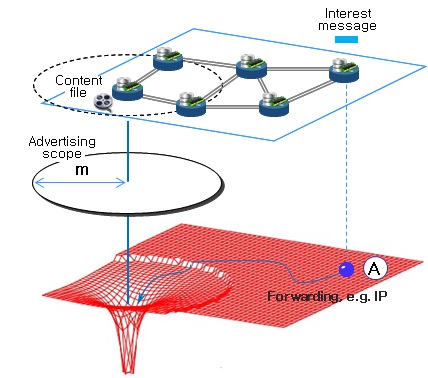 Since the Internet was initially designed as a connection oriented communication network, its role has been changed to a content oriented data sharing network. This new paradigm requires a major transformation of the current Internet architecture, which leads to the birth of Information Centric Networking (ICN) concept in today's Internet. In this project we design an ICN architecture named the Cache Aware Target idenTification (CATT) and introduce the architecture by focusing on two of its major components, namely routing and content caching. For each component of the CATT, Potential Based Routing (PBR) and topology aware caching policy are proposed respectively. Due to the synergy effect of both components, the CATT provides an efficient solution of content dissemination in ICN environment.

3. Development of the self-organizing algorithm to construct a short tail power law topology for P2P networks.

4. Development of the self-organizing algorithm for the topological transformation of Peer-to-Peer (P2P) networks.

Although, conventional approaches can construct a small diameter topology of which P2P networks can take advantage to achieve high search efficiency, some extreme cases such as disastrous multiple failures of peers may distort its structure severely so that inherent topological advantages may be disappeared. In such a case, some mechanisms are required to restore the distorted topological structure.
For this reason, in this project we developed a rewiring method to transform a network topology into a small diameter and highly clustered network topology. The proposed method can be implemented in a self organizing manner which means that individual peers interact directly with each other in a distributed fashion without any externally or centrally dedicated control unit. Additionally, we demonstrated how a truncated power law topology can be constructed through the proposed rewiring method. The truncated power law topology solves one known problem in a general power law topology that a few hub nodes suffer from high traffic load which is not desirable phenomenon for P2P networks. 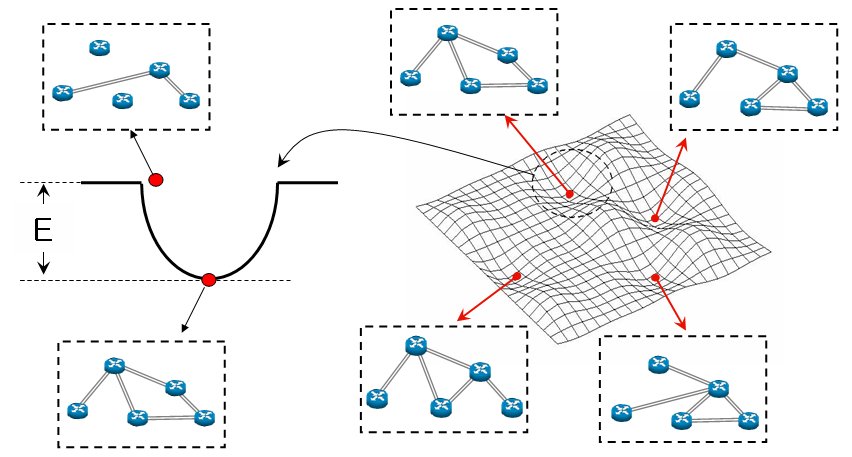 There has been an attempt to use a dynamic model called an attractor selection method for the control of a logical topology. While the conventional approach focused on the use of the stochastic behavior of the model, the deterministic part of the model, which can be considered as an attractor network, was relatively ignored.
In this project we make use of the deterministic part of the model called an attractor network to control the topological structure of a logical network. There are two advantages using the attractor network model. Firstly, a lyapunov function is defined in the model. Thus, when a system state becomes unstable due to some disturbances over the system, the dynamic system always improves its stability through the dynamic process. In other words, the dynamic evolution guarantees that the system evolves into a stable system state. Secondly, the evolution speed of the dynamic system can be improved by realizing the model on electronic circuit, possibly on a VLSI (Very large-scale integration) circuit with a parallel-distributed process.

Traffic Matrix estmation problem is formulated as a non-linear optimization problem based on the generalized Kruithof approach and then the affine scaling method is used to solve the optimization problem. We have proposed a strategy to accelerate the rate of convergence of the affine scaling method using a geometric analysis of the problem. The strategy involves finding good starting points and a search directions since the choice of the feasible starting point and the searching direction affect the convergence speed of the interior point algorithm.

We proposed a new statistical approach for traffic matrix estimation, which incorporates a traffic descriptor, Markovian Arrival Process of order two (MAP2), that allows the burstiness and correlation structure of IP traffic to be modelled. The proposed method solves the traffic matrix estimation problem by dividing it into two main subproblems: 1) First, from a multiple set of link counts obtainable from a consecutive set of Simple Network Management Protocol (SNMP) measurements and a given routing matrix, obtain a series of traffic matrices by applying a standard deterministic approach. The components of these matrices represent estimates of the volumes of flows being exchanged between all pairs of nodes at the respective measurement points and they form a stochastic counting process. 2) Then, a Markovian Arrival Process of order two (MAP-2) is applied to model the counting processes formed from this series of estimated traffic matrices.

We proposed a new dynamic approach for TM estimation that formulates the weight changes problem as the LP based on the dual version of the multi-commodity flow problem. Since the proposed method takes advantage of an LP approach which is a mature field that provides many efficient and fast algorithms to solve large problems, it is computationally more efficient than the previously adopted heuristic search algorithms as well as enabling the setting of link load limits in the problem formulation so that the re-route traffic using a new weight set does not cause an overloaded network.